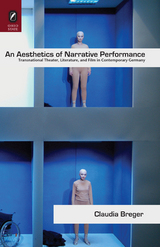 The contemporary moment has been described in terms of both a “narrative” and a “performative turn,” but the overlap between these two has largely escaped attention. This curious gap is explained by the ways in which scholars across the humanities have defined narrative and performance as opposite forces, emphasizing their respective affiliations with time vs. space and identity constitution vs. its undoing. Although the opposition has been acknowledged as false by many in this simple form, its shifting instantiations continue to shape the ways we make sense of the arts as well as society. Instead, An Aesthetics of Narrative Performance: Transnational Theater, Literature, and Film in Contemporary Germany by Claudia Breger maps the complexities of imaginative worldmaking in contemporary culture through an aesthetics of narrative performance: an ensemble of techniques exploring the interplay of rupture and recontextualization in the process of configuration. Interlacing diverging definitions of both narrative and performance, the study outlines two clusters of such techniques—scenic narration and narrative “presencing” in performance vs. forms of narrative theatricalization—and analyzes the cultural work they do in individual works in three different media: literature, film, and theater. These readings focus on the rich configurations of contemporary worldmaking “at location Germany.” In the discussed representations of German unification, contemporary cultures of migration, and the transnational War on Terror, the aesthetics of narrative performance finds its identity as a multifaceted imaginative response to the post/modern crisis of narrative authority.
AUTHOR BIOGRAPHY
Claudia Breger is associate professor of Germanic Studies and adjunct associate professor of Communication and Culture and Gender Studies at Indiana University, Bloomington.