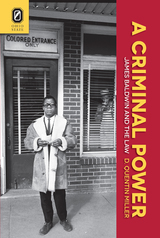 James Baldwin, one of the major African American writers of the twentieth century, has been the subject of a substantial body of literary criticism. As a prolific and experimental author with a marginal perspective—a black man during segregation and the Civil Rights era, a homosexual at a time when tolerance toward gays was not common—Baldwin has fascinated readers for over half a century. Yet Baldwin’s critics have tended to separate his weighty, complex body of work and to examine it piecemeal. A Criminal Power: James Baldwin and the Law is the first thematic study to analyze the complete scope of his work. It accomplishes this through an expansive definition and thorough analysis of the social force that oppressed Baldwin throughout his life: namely, the law. Baldwin, who died in 1987, attempted suicide in 1949 at the age of 25 after spending eight-days in a French prison following an absurd arrest for “receiving stolen goods”—a sheet that his acquaintance had taken from a hotel. This seemingly trite incident made Baldwin painfully aware of what he would later call the law’s “criminal power.”
Up to now, the only book-length studies to address Baldwin’s entire career have been biographies and artistic “portraits.” D. Quentin Miller corrects this oversight in a comprehensive volume that addresses and unifies all of Baldwin’s work. Miller asserts that the Baldwin corpus is a testament to how the abuse of power within the American legal, judicial, and penal systems manifested itself in the twentieth century.
AUTHOR BIOGRAPHY
D. Quentin Miller is professor of English at Suffolk University in Boston.