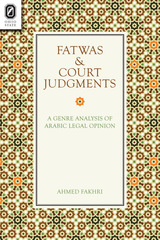 The differences between the two genres stem from elements of their socio-cultural context, such as the role relations of the participants and the characteristics of the institutions to which the genres belong. Moving beyond these contexts, Fatwas and Court Judgments reveals generic practices that have broad implications for understanding various aspects of wider Arab culture, including the tension between modern secular ideologies and traditional religious beliefs, the male-dominated access to discourse, and the prevalence of utilitarian attitudes exhibited in “fatwa shopping.”
AUTHOR BIOGRAPHY
Ahmed Fakhri is associate professor of linguistics at West Virginia University.
REVIEWS
“The main argument of Fatwas and Court Judgments: A Genre Analysis of Arabic Legal Opinion is that Arabic legal genres are strongly bound to their social, economic, and political context, and that therefore their linguistic and discourse features can be explained by this relationship. This is an outstanding study in the framework of Arabic scholarship, which I found inspiring and convincing.” —Manuel Fería García, Universidad de Granada

Chapter Three: Rhetorical Analysis
The Rhetorical Structure of the Court Judgments
Move 1: Giving the History of the Case
Move 2: Stating the Petitioner’s Claims
Move 3: Presenting the Opinion of the Court
Move 4: Pronouncing the Decision
The Rhetorical Structure of the Fatwas
Move Analysis of the Fatwas
Variation in the Realization of Moves
Assessing the Analysis
Discussion
Degree of Structural Variation
Difference in Degree of Relevance
Summary

Chapter Five: Conclusions and Implications
The Significance of Adopting the French Model in the Court Judgments
Consequences of Borrowing on the Host Language
Morphosyntactic Adjustments
Impact of the Transfer of French Patterns on Arabic Rhetoric
Fatwas and Their Sociocultural Milieu: Mutual Influences
The Sociocultural Climate
Impact on the Rhetoric of Fatwas
Remarks on Genre and Culture
Intellectual Styles: Thought Clarity and Explicitness
Politeness and Face
Utilitarian Comportments
Gender and Access to Discourse
Suggestions for Further Research
Summary