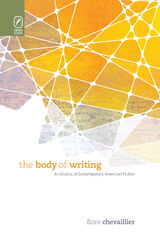 The Body of Writing: An Erotics of Contemporary American Fiction examines four postmodern texts whose authors play with the material conventions of “the book”: Joseph McElroy’s Plus (1977), Carole Maso’s AVA (1993), Theresa Hak Kyung Cha’s DICTEE (1982), and Steve Tomasula’s VAS (2003). By demonstrating how each of these works calls for an affirmative engagement with literature, Flore Chevaillier explores a centrally important issue in the criticism of contemporary fiction. Critics have claimed that experimental literature, in its disruption of conventional story-telling and language uses, resists literary and social customs. While this account is accurate, it stresses what experimental texts respond to more than what they offer. This book proposes a counter-view to this emphasis on the strictly privative character of innovative fictions by examining experimental works’ positive ideas and affects, as well as readers’ engagement in the formal pleasure of experimentations with image, print, sound, page, orthography, and syntax.