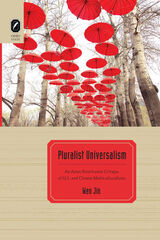 Pluralist Universalism: An Asian Americanist Critique of U.S. and Chinese Multiculturalisms by Wen Jin is an extended comparison of U.S. and Chinese multiculturalisms during the post–Cold War era. Her book situates itself at the intersection of Asian American literary critique and the growing field of comparative multiculturalism. Through readings of fictional narratives that address the issue of racial and ethnic difference in both national contexts simultaneously, the author models a “double critique” framework for U.S.–Chinese comparative literary studies.

The book approaches U.S. liberal multiculturalism and China’s ethnic policy as two competing multiculturalisms, one grounded primarily in a history of racial desegregation and the other in the legacies of a socialist revolution. Since the end of the Cold War, the two multiculturalisms have increasingly been brought into contact through translation and other forms of mediation. Pluralist Universalism demonstrates that a number of fictional narratives, including those commonly classified as Chinese, American, and Chinese American, have illuminated incongruities and connections between the ethno-racial politics of the two nations.
The “double critique” framework builds upon critical perspectives developed in Asian American studies and adjacent fields. The book brings to life an innovative vision of Asian American literary critique, even as it offers a unique intervention in ideas of ethnicity and race prevailing in both China and the United States in the post–Cold War era.

AUTHOR BIOGRAPHY
Wen Jin is assistant professor of English and comparative literature at Columbia University.
REVIEWS
“In her well-researched and elegantly written study, Wen Jin executes her argument regarding generativity of comparative critical paradigms with great effectiveness. Explicitly situated within Asian American literary studies, Jin’s work compellingly redefines that field to be expansively in dialogue with multiple other discursive and theoretical locations, Asian studies, and theories of multiculturalism among them. I believe Jin’s is a book that may well be transformative to the ways in which cultural critique advances within the condition of globality.” —Kandice Chuh, Professor of English, CUNY/The Graduate Center

“Pluralist Universalism is a bold and groundbreaking study of Asian American fiction as a critique of the kinds of multiculturalisms currently articulated, advocated, or practiced in the United States and China. Wen Jin’s critique of multiculturalism is refreshing and compelling, and the author situates herself and the body of literature she studies in a critical terrain that is becoming vital in the twenty-first century. Jin’s is a book of literary archeology with a vision of the future.” —Yunte Huang, professor of English, University of California, Santa Barbara