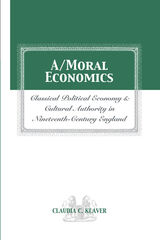 A/Moral Economics is an interdisciplinary historical study that examines the ways which social “science” of economics emerged through the discourse of the literary, namely the dominant moral and fictional narrative genres of early and mid-Victorian England. In particular, this book argues that the classical economic theory of early-nineteenth-century England gained its broad cultural authority not directly, through the well- known texts of such canonical economic theorists as David Ricardo, but indirectly through the narratives constructed by Ricardo’s popularizers John Ramsey McCulloch and Harriet Martineau.

By reexamining the rhetorical and institutional contexts of classical political economy in the nineteenth century, A/Moral Economics repositions the popular writings of both supporters and detractors of political economy as central to early political economists’ bids for a cultural voice. The now marginalized economic writings of  McCulloch, Martineau, Henry Mayhew, and John Ruskin, as well as the texts of Charles Dickens and J. S. Mill, must be read as constituting in part the entities they have been read as merely criticizing. It is this repressed moral logic that resurfaces in a range of textual contradictions—not only in the writings of Ricardo’s supporters, but, ironically, in those of his critics as well.