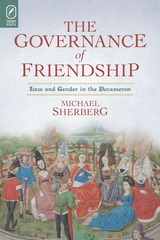 The Governance of Friendship aims well to advance our understanding of Boccaccio as an intellectual: not only steeped in the key texts of his time, but also at the forefront of critical thinking about such issues as law and gender which will play out over the coming centuries and beyond.
AUTHOR BIOGRAPHY
Michael Sherberg is associate professor of Italian, Washington University in St. Louis.
REVIEWS
This important, original study of Boccaccio’s greatest work is the mature product of a sensitively reflective scholar who has lived long and fruitfully with this text and its author. Sherberg brings together three topics—friendship, law, gender—that provide a surprisingly flexible and apposite framework for what turns out to be one of the most complete and compelling interpretations of the Decameron in recent memory.” —Albert Russell Ascoli, Terrill Distinguished Professor of Italian Studies, University of California, Berkeley