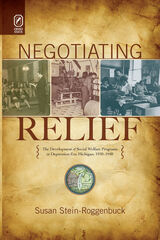 In Negotiating Relief, Susan Stein-Roggenbuck examines Michigan’s implementation of the New Deal relief programs and the state’s reorganization of welfare in 1939. Local officials, social workers, and recipients were key players in the Michigan debates over how best to administer relief. The book sheds important light on the profession of social work and public welfare, and the development of nonfederal relief at the state and local levels after 1935.
Guided by fiscal localism and a firm belief in home rule, local officials fought to retain control of relief. Stein-Roggenbuck argues that while significant changes occurred in welfare policy as a result of the New Deal, many continuities remained. Among those was the responsibility of families to provide financial support. Often forgotten were those on general relief—individuals who did not fit the federal programs such as Aid to Dependent Children (ADC) and Old Age Assistance (OAA). General relief became a third track of welfare.
Drawing on newspaper records, county and city board minutes, social welfare agency records, federal records, and case file records, Negotiating Relief gives voice to the numerous groups involved in welfare debates, particularly the recipients of relief. This book adds to our understanding of the local implementation of welfare policy in both rural and urban areas.
AUTHOR BIOGRAPHY
Susan Stein-Roggenbuck is visiting assistant professor at James Madison College, Michigan State University.
TABLE OF CONTENTS