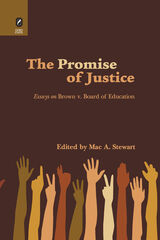 Brown v. Board of Education of Topeka Kansas (1954) was a landmark decision of the United States Supreme Court in the twentieth century. It overturned the Court’s earlier ruling in Plessy v. Ferguson (1896), declaring the establishment of separate public schools for black and white students, as inherently unequal. This victory paved the way for integration in public schools and the civil rights movement of the 1960s. The Promise of Justice: Essays on Brown v. Board of Education assembles fourteen essays about Brown and its consequences in the fifty years following the decision.

Several of the essayists in this anthology provide personal recollections of the conditions before and immediately after the decision in Brown. One of the authors was a child plaintiff in a related case. Another was the federal district judge responsible for deciding in favor of, and then overseeing, integration in a major northern city. Contributors to this volume include legal specialists, sociologists, educators, and political scientists. A history of the legal milestones of integration is included, as well as judgments about the progress that has been made and the need for additional actions to assure racial equality under the law. Ten of these essays first appeared in a special issue of The Negro Educational Review published in January 2005, and four were written expressly for this volume.

AUTHOR BIOGRAPHY
Mac A. Stewart is special assistant to the president for diversity and a vice provost at The Ohio State University.
TABLE OF CONTENTS