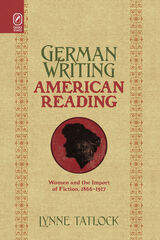 In postbellum America, publishers vigorously reprinted books that were foreign in origin, and Americans thus read internationally even at a moment of national consolidation. A subset of Americans’ international reading—nearly 100 original texts, approximately 180 American translations, more than 1,000 editions and reprint editions, and hundreds of thousands of books strong—comprised popular fiction written by German women and translated by American women. German Writing, American Reading: Women and the Import of Fiction, 1866–1917 by Lynne Tatlock examines the genesis and circulation in America of this hybrid product over four decades and beyond. These entertaining novels came to the consumer altered by processes of creative adaptation and acculturation that occurred in the United States as a result of translation, marketing, publication, and widespread reading over forty years. These processes in turn de-centered and disrupted the national while still transferring certain elements of German national culture. Most of all, this mass translation of German fiction by American women trafficked in happy endings that promised American readers that their fondest wishes for adventure, drama, and bliss within domesticity and their hope for the real power of love, virtue, and sentiment could be pleasurably realized in an imagined and quaintly old-fashioned Germany—even if only in the time it took to read a novel.
AUTHOR BIOGRAPHY
Lynne Tatlock is the Hortense and Tobias Lewin Distinguished Professor in the Humanities at Washington University in St. Louis, where she is also Director, Committee on Comparative Literature and is in the Department of Germanic Languages and Literatures.