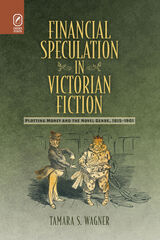 In Financial Speculation in Victorian Fiction: Plotting Money and the Novel Genre, 1815-1901, Tamara S. Wagner explores the ways in which financial speculation was imagined and turned into narratives in Victorian Britain. Since there clearly was much more to literature’s use of the stock market than a mere reflection of contemporary economic crises alone, a much-needed reappraisal of the Victorians’ fascination with extended fiscal plots and metaphors also asks for a close reading of the ways in which this fascination remodeled the novel genre. It was not merely that interchanges between literary productions and the credit economy’s new instruments became self-consciously worked into fiction. Financial uncertainties functioned as an expression of indeterminacy and inscrutability, of an encompassing sense of instability.

Bringing together canonical and still rarely discussed texts, this study analyzes the making and adaptation of specific motifs, of variously adapted tropes, extended metaphors, and recurring figures, including their transformation of a series of crises into narratives. Since these crises were often personal and emotional as well as financial, the new plots of speculation described maps of some of the major themes of nineteenth-century literature. These maps led across overlapping categories of literary culture, generating zones of intersection between otherwise markedly different subgenres that ranged from silver-fork fiction to the surprisingly protean versions of the sensation novel’s domestic Gothic. Financial plots fascinatingly operated as the intersecting points in these overlapping developments, compelling a reconsideration of literary form.
AUTHOR BIOGRAPHY
Tamara S. Wagner is associate professor of English literature at Nanyang Technological University in Singapore.