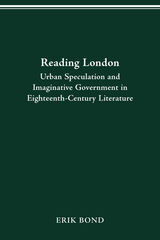 Erik Bond argues that Restoration London’s rapidly changing administrative geography as well as mid-eighteenth-century London’s proliferation of print helped writers generate several strategies to imagine that they could control not only other Londoners but also their interior selves. As a result, Reading London encourages readers to respect the historical alterity or “otherness” of eighteenth-century literature while recognizing that these historical alternatives prove that our present problems with urban societies do not have to be this way. In fact, the chapters illustrate how eighteenth-century writers gesture towards solutions to problems that urban citizens now face in terms of urban terror, crime, policing, and communal conduct.
AUTHOR BIOGRAPHY
Erik Bond is assistant professor of English at the University of Michigan-Dearborn.
TABLE OF CONTENTS