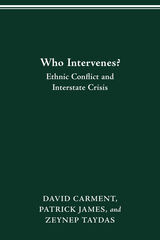 Who Intervenes? takes as a given that there are tensions among ethnic groups throughout the world. But it is not at all clear when and why these tensions escalate into violence. The likelihood and character of intervention depend upon the interplay of two factors: ethnic composition and institutional constraint. A fourfold typology is produced. For example, states with high constraints and ethnic diversity are likely to intervene only for reasons related to national interests, while states with both ethnic dominance and low constraint are most disposed to intervene. The disposition to intervene is catalyzed, the authors hypothesize, by the presence of ethnic affinity and cleavage.

The book includes a comparative analysis of five case studies: India and Sri Lanka, Somalia and Ethiopia, Malaysia and the Thai Malay (a non-intervention), the immediate aftermath of the breakup of Yugoslavia, and Greece and Turkey with Cyprus. The case histories produce strong support for the relevance of the typology and catalysts. Ethnic composition, institutional constraint, and ethnic affinity and cleavage are very useful factors in distinguishing both the likelihood and form of intervention.

Policies that encourage institutional reform and support ethnic diversity can be expected to reduce the likelihood and even the perceived need for intervention.
AUTHOR BIOGRAPHY
David Carment is professor of international affairs, NPSIA, Carleton University, Ottawa, Canada. Patrick James is professor of international relations at the University of Southern California. Zeynep Taydas teaches courses in international relations and comparative politics at the University of Missouri–Columbia.
REVIEWS
“Who Intervenes? articulates a well thought out theory of the relationship between ethnic conflict and international conflict. It builds on the work of Robert Putnam on two-level games, but sets out a quite new and original theory that ties domestic institutional constraints, affect, and ethnic interests together into a coherent argument. This is a fine study that will stimulate considerably more research on the nexus between ethnic conflict and international conflict.” —Bruce Bueno de Mesquita, Stanford University and New York University