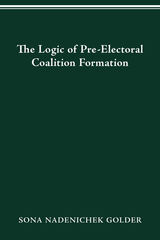 The Logic of Pre-Electoral Coalition Formation by Sona Nadenichek Golder includes a combination of methodological approaches (game theoretic, statistical, and historical) to explain why pre-electoral coalitions form in some instances but not in others. The results indicate that pre-electoral coalitions are more likely to form between ideologically compatible parties. They are also more likely to form when the expected coalition size is large (but not too large) and when the potential coalition partners are similar in size. Ideologically polarized party systems and disproportional electoral rules in combination also increase the likelihood of electoral coalition formation.

Golder links the analysis of pre-electoral coalition formation to the larger government coalition literature by showing that pre-electoral agreements increase (a) the likelihood that a party will enter government, (b) the ideological compatibility of governments, and (c) the speed with which governments take office. In addition, pre-electoral coalitions provide an opportunity for combining the best elements of the majoritarian vision of democracy with the best elements of the proportional vision of democracy.
AUTHOR BIOGRAPHY
Sona Nadenichek Golder is assistant professor of political science at Florida State University.

REVIEWS
“This book takes up a topic that those of us studying coalition governments have come increasingly to realize is vital. The empirical work in this book fills a crucial gap, and I am sure that comparativists of all stripes will want to read this work to understand this phenomenon.”
—Frances Rosenbluth, Yale University


“The Logic of Pre-Electoral Coalition Formation is a model of research that is well designed and extremely well communicated. It has changed the way I think about the formation of parties and party systems. I will no longer be able to think about why parties are the sizes they are, or why countries have the number of parties they do, without considering the options that small parties have to form pre-electoral coalitions while keeping their own identity as small parties.”
—Kathleen Bawn, University of California–Los Angeles