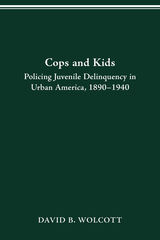 Juvenile courts were established in the early twentieth century with the ideal of saving young offenders from “delinquency.” Many kids, however, never made it to juvenile court. Their cases were decided by a different agency—the police.

Cops and Kids analyzes how police regulated juvenile behavior in turn-of-the-century America. Focusing on Los Angeles, Chicago, and Detroit, it examines how police saw their mission, how they dealt with public demands, and how they coped daily with kids. Whereas most scholarship in the field of delinquency has focused on progressive-era reformers who created a separate juvenile justice system, David B. Wolcott’s study looks instead at the complicated, sometimes coercive, relationship between police officers and young offenders. Indeed, Wolcott argues, police officers used their authority in a variety of ways to influence boys’ and girls’ behavior. Prior to the creation of juvenile courts, police officers often disciplined kids by warning and releasing them, keeping them out of courts. Establishing separate juvenile courts, however, encouraged the police to cast a wider net, pulling more young offenders into the new system. While some departments embraced “child-friendly” approaches to policing, others clung to rough-and-tumble methods. By the 1920s and 1930s, many police departments developed new strategies that combined progressive initiatives with tougher law enforcement targeted specifically at growing minority populations.

Cops and Kids illuminates conflicts between reformers and police over the practice of juvenile justice and sheds new light on the origins of lasting tensions between America’s police and urban communities.
AUTHOR BIOGRAPHY
David B. Wolcott is visiting assistant professor in the department of history at Miami University, Oxford, Ohio.
REVIEWS
“Wolcott offers a new point of view on the history of juvenile delinquency and juvenile justice, bringing police to the foreground and emphasizing their role in the process. This is a must read for anybody interested in the history of crime and criminal justice.” —Wilbur Miller, SUNY Stony Brook


“Cops and Kids complements other scholarship in the field, pushing the boundaries of the history of crime and criminal justice. It would be a great addition in a class on legal history.” —Anne Meis Knupfer, Purdue University