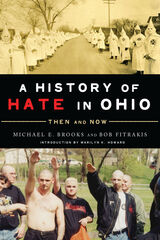 While Ohio’s rich history of abolitionism is deservedly known, its equally long history of white supremacist activity—including the Ohio-founded neo-Nazi website the Daily Stormer and the many groups currently documented by the Southern Poverty Law Center—is less talked about. In A History of Hate in Ohio: Then and Now, historian Michael E. Brooks and political scientist and journalist Bob Fitrakis join forces to present the first comprehensive study of white supremacy and hate groups in the Buckeye State. Brooks analyzes the historical origins of white supremacy in Ohio and the emergence of the earliest hate groups, covering the colonial period into the 1970s. Fitrakis then picks up the narrative to trace the evolution of hate activity into the present day, documenting the growing interconnections between the once-separate Ku Klux Klan and neo-Nazi groups as well as the concurrent emergence of antiracist groups in Ohio. An essential primer on the origins and workings of hate groups, A History of Hate in Ohio issues a timely challenge to all Ohioans to acknowledge, understand, and repudiate hate.
AUTHOR BIOGRAPHY
Michael E. Brooks is Associate Professor of Teaching at Bowling Green State University. He is the author of The Ku Klux Klan in Wood County.
Bob Fitrakis is Distinguished Full Professor of Political Science at Columbus State Community College and editor/publisher of the Free Press.

REVIEWS
“Painstakingly exposes the long, tragic, and pervasive existence (and occasional dominance) of racial hatred and discrimination in the state.…A History of Hate in Ohio offers new insights regarding white supremacist movements in the Midwest and nationally. The deep connections between contemporary political leaders and the white supremacist movements of the 1980s and 1990s are especially revealing.” —Andrew Varsanyi, H-Net


“In this extensively researched and meticulously documented book, Brooks and Fitrakis effectively trace the origins of racism and nativism that have punctuated Ohio’s history, including the ‘everyday white supremacy’ that is present to this day.” —Barry Balleck, author of Allegiance to Liberty: The Changing Face of Patriots, Militias, and Political Violence in America


“An exceptionally thorough history of white supremacy focused on Ohio but relevant nationwide. By analyzing supremacist influences on American history, from conquests of Native Americans to today’s alt right, the authors have created an eye-opening resource. Its accessible style will engage a broad readership.” —Deborah Levine, editor of American Diversity Report


List of Illustrations
Acknowledgments
List of Acronyms
Introduction
Then: A History of Racism and Bigotry in Ohio
Now
Notes
Bibliography
Index