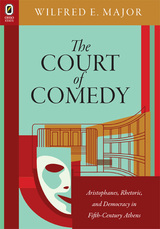 The Court of Comedy: Aristophanes, Rhetoric, and Democracy in Fifth-Century Athens, by Wilfred E. Major, analyzes how writers of comedy in Classical Greece satirized the emerging art of rhetoric and its role in political life. In the fifth century BCE, the development of rhetoric proceeded hand in hand with the growth of democracy both on Sicily and at Athens. In turn, comic playwrights in Athens, most notably Aristophanes, lampooned oratory as part of their commentary on the successes and failures of the young democracy.

This innovative study is the first book to survey all the surviving comedy from the fifth century BCE on these important topics. The evidence reveals that Greek comedy provides a revealing commentary on the incipient craft of rhetoric before its formal conventions were stabilized. Furthermore, Aristophanes’ depiction of rhetoric and of Athenian democratic institutions indicates that he fundamentally supports the Athenian democracy and not, as is often argued, oligarchic opposition to it.

These conclusions confirm recent work that reinterprets the early development of rhetoric in Classical Greece and offer fresh perspectives on the debate over the role of comedy in early Greek democracy. Throughout, Major capitalizes on recent progress in understanding of the performance dynamics of Classical Greek theater.

AUTHOR BIOGRAPHY
Wilfred E. Major is assistant professor of Classics at Louisiana State University.
REVIEWS
“The crucial insight of this carefully written but also passionate and committed study is that the plays of Aristophanes are the most abundant source of public deliberative discourse from the last decades of the fifth century BCE. The introduction makes a felicitous juxtaposition of multiple texts to introduce the argument (already initiated by others, but not yet applied to comedy) that the rhetoric of subsequent centuries was not yet a codified, lifeless system in the fifth century, but rather a vital, diverse, and very much developing current topic of debate.” —Jeffrey Rusten, professor of classics, Cornell University

Appendix        Catalogue of Terminology, Practitioners, and Institutions Related to Rhetoric in the Remains of Fifth-Century Comedy