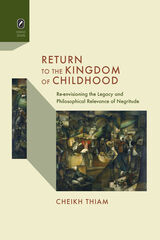 Return to the Kingdom of Childhood: Re-envisioning the Legacy and Philosophical Relevance of Negritude examines the philosophy of Negritude through an innovative analysis of Léopold Sédar Senghor’s oeuvre. In the first book-length study of Senghorian philosophy, Cheikh Thiam argues that Senghor’s work expresses an Afri-centered conception of the human while simultaneously offering a critique of the Western universalization of “man.” Senghor’s corrective, descriptive, and prescriptive theory of humanness is developed through a conception of race as a cultural manifestation of being.

Thiam contends that Senghor’s conception of race entails an innovative Afri-centered epistemology and ontology. For Senghor, races are the effects of particular groups’ relations to the world. The so-called “Negroes,” for example, are determined by their epistemology based on their fluid understanding of the ontological manifestations of being. The examination of this ontology and its ensuing epistemology, which is constitutive of the foundation of Senghor’s entire oeuvre, indicates that Negritude is a postcolonial philosophy that stands on its own.

The hermeneutics of Senghor’s race theory show that the Senegalese thinker’s pioneering postcolonial philosophy remains relevant in the postcolonial era. In fact, it questions and expands the works of major contemporary African-descended scholars such as Paul Gilroy, Edouard Glissant, and Molefi Asante. Thiam’s approach is thoroughly interdisciplinary, combining perspectives from philosophy, literary analysis, anthropology, and postcolonial, African, and cultural studies.
AUTHOR BIOGRAPHY
Cheikh Thiam is assistant professor of French and African and African-American Studies at The Ohio State University.

TABLE OF CONTENTS
Contents
Acknowledgments
Introduction. Decolonialitude: The Brighter Side of Negritude
Chapter 1. The Limits of the Colonial Paradigm: Negritude and Its Critique
Chapter 2. Negritude, Epistemology, and African Vitalism
Chapter 3. Métissages
Chapter 4. Negritude Is not Dead!
Conclusion
Notes
Bibliography
Index