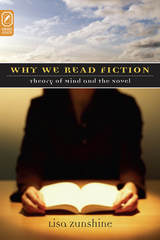 Why We Read Fiction offers a lucid overview of the most exciting area of research in contemporary cognitive psychology known as “Theory of Mind” and discusses its implications for literary studies. It covers a broad range of fictional narratives, from Richardson’s Clarissa, Dostoyevski’s Crime and Punishment, and Austen’s Pride and Prejudice to Woolf’s Mrs. Dalloway, Nabokov’s Lolita, and Hammett’s The Maltese Falcon. Zunshine’s surprising new interpretations of well-known literary texts and popular cultural representations constantly prod her readers to rethink their own interest in fictional narrative. Written for a general audience, this study provides a jargon-free introduction to the rapidly growing interdisciplinary field known as cognitive approaches to literature and culture.
REVIEWS
“Zunshine proved beyond doubt that even the more conservative literary student who just wants a better reading or understanding of a specific novel stands to gain considerably by adopting the cognitive outlook and vocabulary she suggests.” —Uri Margolin