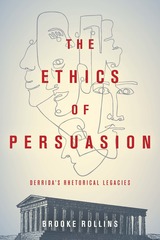 In The Ethics of Persuasion: Derrida’s Rhetorical Legacies, Brooke Rollins argues that some of the most forceful and utilitarian examples of persuasion involve significant ethical dimensions. Using the work of Jacques Derrida, she draws this ethical imperative out from a series of canonical rhetorical texts that have traditionally been understood as insistent or even guileful instances of persuasion. Her reconsideration of highly determined pieces by Gorgias, Lysias, Isocrates, and Plato encourages readers to inherit the rhetorical tradition differently, and it pinpoints the important rhetorical dimensions of Derrida’s own work.

Drawing on Derrida’s (non)definition of ethics and his pointed accounts of performativity, Rollins argues that this vital ethical component of many ancient theories, practices, and pedagogies of persuasion has been undertheorized for more than two millennia. Through deconstructive readings of some of these texts, she shows us that we are not simply sovereign beings who both wield and guard against linguistic techniques of rule. Our persuasive endeavors, rather, are made possible by an ethics—an always prior encounter with otherness that interrupts self-presence.
AUTHOR BIOGRAPHY
Brooke Rollins is Assistant Professor of English at Lehigh University.
REVIEWS
“The Ethics of Persuasion is elegant, clear, and appropriately pitched. Rollins is citing the right texts and thinkers in this book, and she does it with the sort of even-handed diplomacy I’ve come to expect from her work.” —Diane Davis


“It’s incredibly unusual for anyone to be able to engage compellingly both with deconstruction and with classical texts, but Rollins is a disciplined and insightful reader of both. Amazingly, she makes the collocation of deconstruction and classical rhetoric seem natural.” —Sean Gurd