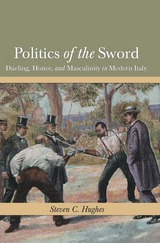 Following its creation as a country in 1861, Italy experienced a wave of dueling that led commentators to bemoan a national “duellomania” evidenced by the sad spectacle of a duel a day. Pamphlets with titles like “Down with the Duel” and “The Shame of the Duel” all communicated the passion of those who could not believe that a people supposedly just returned to the path of progress and civilization had wholeheartedly embraced such a “barbaric” custom. Yet these critics were consistently countered by sober-minded men of rank and influence who felt that the duel was necessary for the very health of the new nation.
Steven C. Hughes argues that this extraordinary increase in chivalric combat occurred because the duel played an important role in the formation, consolidation, and functioning of united Italy. The code of honor that lay at the heart of the dueling ethic offered a common model and bond of masculine identity for those patriotic elites who, having created a country of great variety and contrast for often contradictory motives, had to then deal with the consequences. Thus dueling became an iconic weapon of struggle during the Risorgimento, and, as Italy performed poorly on the stage of great power politics, it continued to offer images of martial valor and manly discipline. It also enhanced the social and political power of the new national elites, whose monopoly over chivalric honor helped reinforce the disenfranchisement of the masses. Eventually, the duel fed into the hypermasculinity and cult of violence that marked the early fascist movement, but in the end it would prove too individualistic in its definition of honor to stand up to the emerging totalitarian state. Although Mussolini would himself fight five duels at the start of his career, the duel would disappear along with the liberal regime that had embraced it.
AUTHOR BIOGRAPHY
Steven C. Hughes is professor of history at Loyola College in Maryland.
REVIEWS
“Steven C. Hughes presents a complex and convincing argument about the role of duels in modern Italy. His study will fill a remarkable gap in both the historiography of dueling and the historiography of modern Italy.” —Silvana Patriarca, associate professor of history, Fordham University

“Politics of the Sword is one of the most exciting works in recent modern Italian history and criminal justice history. It is mature, complex, and elegant while based on enormous, painstaking research into primary sources.” —Mary Gibson, professor of history, John Jay College of Criminal Justice