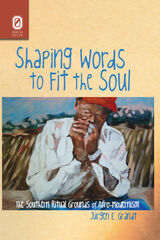 Taking up where he left off with Kinds of Blue (The Ohio State University Press, 2004), Jürgen E. Grandt seeks to explore in depth some of the implications of the modernist jazz aesthetic resonating in the African American literary tradition. Grandt’s new book, Shaping Words to Fit the Soul:The Southern Ritual Grounds of Afro-Modernism, probes the ways in which modernism’s key themes of fragmentation, alienation, and epistemology complicate the mapping of the American South as an “authenticating” locus of African American narrative. Rather than being a site of authentication, the South constitutes a symbolic territory that actually resists the very narrative strategies deployed to capture it.

The figurative ritual grounds traversed in texts by Frederick Douglass, Jean Toomer, Richard Wright, and Tayari Jones reveal Afro-modernism as modernism with a historical conscience. Since literary Afro-modernism recurrently points to music as a symbolic territory of liberatory potential, this study also visits a variety of soundscapes, from the sorrow songs of the slaves to the hip-hop of the Dirty South, and from the blues of W. C. Handy to the southern rock of the Allman Brothers Band.

Afro-modernism as modernism with a historical conscience thus suggests a reconfiguration of southern ritual grounds as situated in time and mind rather than time and place, and the ramifications of this process extend far above and beyond the Mason-Dixon Line.

AUTHOR BIOGRAPHY
Jürgen E. Grandt is Marion L. Brittain Fellow in the School of Literature, Communication, and Culture at the Georgia Institute of Technology.
TABLE OF CONTENTS
Contents
Acknowledgments
Introduction: “Gone With ‘What’ Wind?”: Afro-Modernism’s Southern Ritual Grounds
Chapter 1: A Life and Power Far Beyond the Letter: The Afro-Modernism of Life and Times of Frederick Douglass
Chapter 2: Shaping Words to Fit the Soul: Afro-Modernism and the Breakdown of Communication in Jean Toomer’s Cane
Chapter 3: Roll Call: Richard Wright’s “Long Black Song” and the Betrayal of Music
Chapter 4: Blues and the Abstract Truth: The Southern Groove Continuum from W. C. Handy to the Allman Brothers Band
Chapter 5: Life and Death in the Dirty South: The Urban Ritual Grounds of Tayari Jones
Conclusion: “The Biggest Colored Show on Earth”: Afro-Modernism, Hip-Hop, and Postmodern Blackness
Notes
Selected Discography
Works Cited
Index