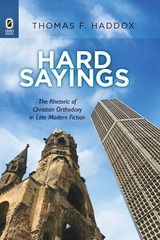 Hard Sayings: The Rhetoric of Christian Orthodoxy in Late Modern Fiction by Thomas F. Haddox examines the work of six avowedly Christian writers of fiction in the period from World War II to the present. This period is often characterized in western societies by such catchphrases as “postmodernism” and “secularization,” with the frequent implication that orthodox belief in the dogmas of Christianity has become untenable among educated readers. How, then, do we account for the continued existence of writers of self-consciously literary fiction who attempt to persuade readers of the truth, desirability, and utility of the dogmas of Christianity? Is it possible to take these writers’ efforts on their own terms and to understand and evaluate the rhetorical strategies that this kind of persuasion might entail?
Informed by the school of rhetorical narratology that includes such critics as Wayne Booth, James Phelan, and Richard Walsh, Hard Sayings offers fresh new readings of fictive works by Flannery O’Connor, Muriel Spark, John Updike, Walker Percy, Mary Gordon, and Marilynne Robinson. In its argument that orthodox Christianity, as represented in fiction, still has the power to persuade and to trouble, it contributes to ongoing debates about the nature and scope of modernity, postmodernity, and secularization.
AUTHOR BIOGRAPHY
Thomas F. Haddox is associate professor of English at the University of Tennessee, Knoxville.
TABLE OF CONTENTS
Contents
Acknowledgments
Introduction: Christian Orthodoxy and the Rhetoric of Fiction
Chapter 1: Flannery O’Connor, the Irreducibility of Belief, and the Problem of Audience
Chapter 2: Catholicism for “Really Intelligent People”: The Rhetoric of Muriel Spark
Chapter 3: John Updike’s Rhetoric of Christian American Narcissism
Chapter 4: Walker Percy’s Rhetoric of Time, Apocalypse, and the Modern Predicament
Chapter 5: The Uses of Orthodoxy: Mary Gordon and Marilynne Robinson
Epilogue: On Belief and Academic Humility
Works Cited
Index