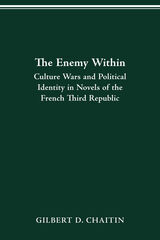 In The Enemy Within, Gilbert D. Chaitin deepens our understanding of the nature and sources of culture wars during the French Third Republic. The psychological trauma caused by the Ferry educational reform laws of 1880-1882, which strove to create a new national identity based on secular morality rather than God-given commandments, pitted Catholics against proponents of lay education and gave rise to novels by Bourget, Barrès, A. France, and Zola.
By deploying Lacanian concepts to understand the “erotics of politics” revealed in these novels, Chaitin examines the formation of national identity, offering a new intellectual history of the period and shedding light on the intimate relations among literature, education, philosophy, morality, and political order. The mechanisms described in The Enemy Within provide fresh insight into the affective structure of culture wars not only in the French Third Republic but elsewhere in the world today.
AUTHOR BIOGRAPHY
Gilbert D. Chaitin is professor emeritus of French and comparative literature at Indiana University-Bloomington.
TABLE OF CONTENTS