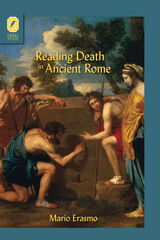 In Reading Death in Ancient Rome, Mario Erasmo considers both actual funerary rituals and their literary depictions in epic, elegy, epitaphs, drama, and prose works as a form of participatory theater in which the performers and the depicters of rituals engage in strategies to involve the viewer/reader in the ritual process, specifically by invoking and playing on their cultural associations at a number of levels simultaneously. He focuses on the associative reading process—the extent to which literary texts allude to funeral and burial ritual, the narrative role played by the allusion to recreate a fictive version of the ritual, and how the allusion engages readers’ knowledge of the ritual or previous literary intertexts.

Such a strategy can advance a range of authorial agendas by inviting readers to read and reread assumptions about both the surrounding Roman culture and earlier literature invoked through intertextual referencing. By (re)defining their relation to the dead, readers assume various roles in an ongoing communion with the departed.

Reading Death in Ancient Rome makes an important and innovative contribution to semiotic theory as applied to classical texts and to the emerging field of mortality studies. It should thus appeal to classicists as well as to advanced undergraduate and graduate students in art history and archeology.

AUTHOR BIOGRAPHY
Mario Erasmo is associate professor of classics, University of Georgia.
REVIEWS
“This book is beautifully written and impeccably researched. It should have a very wide audience and appeal to scholars working in the traditional areas of philology, archaeology, history, art history and anthropology, as well as the emerging field of mortality studies.”—Eric Varner, Classics and Art History, Emory University