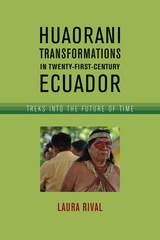 The indigenous people of the Amazon Basin known as the Huaorani are one of the world’s most intriguing peoples. The community of just under four thousand in Ecuador has been known to the public primarily for their historical identity as a violent society. But Laura Rival reveals the Huaorani in all their humanity and creativity through a longitudinal ethnography, bringing a deeper perspective beyond the stereotype.

Rival’s intimate knowledge of Huaorani culture spans twenty-five years. Here in a collection of broad-ranging essays, she offers a fascinating and provocative study. The first section, “Among Forest Beings,” shows that the Huaorani have long adapted to life in the tropical rain forest with minimal reliance on horticulture, yet have developed a complex relationship with plants. In “In the Longhouse,” the second section, Rival focuses on the intimate relations that create human persons and enact kinship relations. She also discusses women’s lives and perspectives. The third section, “In the Midst of Enemies,” considers how Huaorani society fits in larger political and economic contexts, illustrating how native values shape their encounters with oil companies, the state, and other external forces. Rival carefully analyzes insider/outsider dialectics wherein Huaorani people re-create meaningful and valued worlds in the face of alien projects, such as petroleum development, carbon trading, or intercultural education.

Capitalizing on the author’s decades-long study and interactions in the community, Huaorani Transformations in Twenty-First-Century Ecuador brings new insights to the Huaorani’s unique way of relating to humans, to other-than-humans, and to the forest landscape they have inhabited for centuries.
AUTHOR BIOGRAPHY
Laura Rival is currently an associate professor in the Department of International Development at the University of Oxford. She is the author of Trekking Through History: The Huaorani of Amazonian Ecuador.
TABLE OF CONTENTS