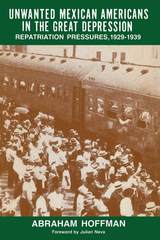 Discouraged by widespread unemployment and alarmed by anti-Mexican sentiment, nearly five hundred thousand Mexican Americans returned to Mexico between 1929 and 1939. Historian Abraham Hoffman captures the despair of these thousands of people of Mexican descent—including those with U.S. citizenship—who were actively coerced into leaving the country.

Prior to 1931, many Mexican Americans left the United States voluntarily, prompted by homesickness, unemployment, and the Mexican government’s offer of free small land parcels. As the Great Depression deepened, repatriation pressures increased. Anglo groups lobbied for laws that excluded aliens from jobs and welfare benefits. Many businessmen, government officials, and social workers believed that removing Mexican Americans would open up jobs for U.S. citizens and alleviate some of the burden placed on relief agencies.

The Department of Labor’s federal deportation drive, launched in 1931, created an atmosphere of fear and tension in Mexican American communities. Immigration agents conducted surprise searches for people who had entered the country illegally, and Mexicans who had crossed the border before restrictive legislation was passed became prime targets of the deportation campaign.

Welfare agencies throughout the United States organized repatriation programs. The Los Angeles County Welfare Bureau, with the most extensive program, was responsible for the removal of more than thirteen thousand Mexican Americans. A few well-publicized deportations had frightened Mexicans who were unsure of their immigration status. Many chose repatriation over possible deportation.

Using much archival material and many previously unpublished government documents, Hoffman focuses on the repatriation experience in Los Angeles. The city’s large Mexican American population provides an excellent case study of the entire movement. He also surveys the process of Mexican repatriation throughout the entire United States.
AUTHOR BIOGRAPHY
Abraham Hoffman has been curator of the Western History Collections and an assistant professor of history at the University of Oklahoma. He has published numerous articles on ethnic history in the Journal of Mexican American History, Pacific Historical Review, Western Historical Quarterly, and History Teacher. Hoffman received his PhD from the University of California at Los Angeles and has worked under a National Endowment for the Humanities grant.
REVIEWS
"In this excellently researched monograph, Hoffman focuses on Los Angeles to picture graphically the repatriation movement of 500,000 Mexicans and Mexican-Americans during the depression decade of 1929-1939."—The Journal of American History

"A welcome addition to the growing number of monographs on Chicano history."—Pacific Historical Review

"Valuable because it investigates and analyzes in excellent historical fashion a part of Mexican American history that has been generally misunderstood."—Southern California Quarterly