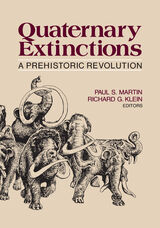 "What caused the extinction of so many animals at or near the end of the Pleistocene? Was it overkill by human hunters, the result of a major climatic change or was it just a part of some massive evolutionary turnover? Questions such as these have plagued scientists for over one hundred years and are still being heatedly debated today. Quaternary Extinctions presents the latest and most comprehensive examination of these questions." —Geological Magazine

"May be regarded as a kind of standard encyclopedia for Pleistocene vertebrate paleontology for years to come." —American Scientist

"Should be read by paleobiologists, biologists, wildlife managers, ecologists, archeologists, and anyone concerned about the ongoing extinction of plants and animals." —Science

"Uncommonly readable and varied for watchers of paleontology and the rise of humankind." —Scientific American

"Represents a quantum leap in our knowledge of Pleistocene and Holocene palaeobiology. . . . Many volumes on our bookshelves are destined to gather dust rather than attention. But not this one." —Nature

"Two strong impressions prevail when first looking into this epic compendium. One is the judicious balance of views that range over the whole continuum between monocausal, cultural, or environmental explanations. The second is that both the data base and theoretical sophistication of the protagonists in the debate have improved by a quantum leap since 1967." —American Anthropologist
AUTHOR BIOGRAPHY
Paul S. Martin is a professor emeritus of geosciences at the University of Arizona.
TABLE OF CONTENTS
Contents
A Word from the Editors
Historical Background and the Beasts Themselves
A Close Look at Significant Sites
The Theoretical Marketplace: Geologic-Climatic Models
The Theoretical Marketplace: Cultural Models
Asia and Africa: Modest Losses
Australia, New Zealand, and the Island Pacific: Severe Losses
An Overview
Index