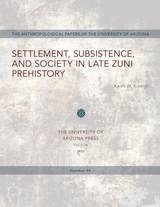 Settlement, Subsistence, and Society in Late Zuni Prehistory
by Keith W. Kintigh
University of Arizona Press, 1985
Paper: 978-0-8165-0831-0
Beginning about A.D. 1250, the Zuni area of New Mexico witnessed a massive population aggregation in which the inhabitants of hundreds of widely dispersed villages relocated to a small number of large, architecturally planned pueblos. Over the next century, twenty-seven of these pueblos were constructed, occupied briefly, and then abandoned. Another dramatic settlement shift occurred about A.D. 1400, when the locus of population moved west to the “Cities of Cibola” discovered by Coronado in 1540.