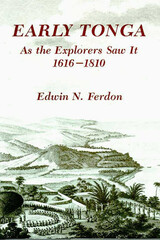 Ethnographic observations and experiences on the Tongan Islands up to 1810—just prior to intensive Christian missionary activities—provide an early historic baseline of culture for those interested in alter culture change in Tonga, the only Polynesian island group that has never been ruled by outsiders. Ferdon has drawn on a variety of records to provide a well-documented and highly readable account of major aspects of Tongan life—material culture, government, food and drink, recreation, customs, trade, and warfare—at the time when European influences were only beginning to modify traditional island patterns.

The ethnohistorical approach to early Tongan culture offers not only a fascinating glimpse into a world long past but also a basis for the comparative study of European acculturation throughout Polynesia.

Edwin N. Ferdon first became interested in early Polynesia while serving as an archaeologist with Thor Heyerdahl’s 1955 expedition to Easter Island. He is also the author of Early Tahiti As the Explorers Saw It, 1767–1797.
AUTHOR BIOGRAPHY
Edwin N. Ferdon first became interested in early Polynesia in 1955 while serving as an archaeologist on Thor Heyerdahl's Norwegian Archaeological Expedition to Easter Island and the East Pacific. Since then he has published numerous papers and a popular book, One Man's Log, on Polynesia's archaeology, ethnography, and geography. During twenty-four years of association with the Museum of New Mexico and School of American Research in Santa Fe and the Arizona State Museum in Tucson, he conducted archaeological surveys and excavations in Mesoamerica, South America, the southwestern United States, and Polynesia. From 1961 to 1978 he was associate director of the Arizona State Museum.
TABLE OF CONTENTS
Contents
List of Illustrations
Preface
1. The Tongans and Their Dwellings
2. Social Organization and Government
3. Kava: The Drink for All Occasions
4. Religion
5. Daily Life
6. From Birth to Death
7. Recreation
8. The Quest for Food
9. Trade and Transportation
10. War and Peace
11. Epilogue
Glossary
Notes to the Chapters
Bibliography
Index