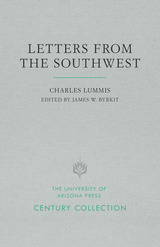 In the fall of 1884, journalist Charles Lummis set out on foot from Ohio to California on assignment for the Los Angeles Times. The reports he mailed ahead to that newspaper were later refashioned for the book A Tramp Across the Continent, a work that helped to establish Lummis as the most active promoter of Southwestern culture who ever lived.

Lummis wrote another set of letters during his journey, however, which he sent back to Ohio for publication by the Chillicothe Leader. Although these letters contain basically the same narrative as those sent to Los Angeles and later found in A Tramp, the Ohio letters more closely reflect the author’s thoughts and observations while on the journey. In fact, a comparison of the two drafts indicates that Lummis spent considerable effort removing spontaneous details from the Ohio letters in favor or a more commercial, self-promoting, and politic reporting for the California paper.

The twenty-four Ohio letters, assembled here by James W. Byrkit, offer a far more candid look at the Southwest than Lummis was later to bring to print, as well as greater insight into the author’s own personality. Byrkit’s introductory essay provides the background for Lummis’s career, compares the three bodies of work relating to the trek, and offers an account of Lummis’s transformation from chronicler to promoter.

James W. Byrkit is on the faculty of Northern Arizona University and is the author of Forging the Copper Collar: Arizona’s Labor-Management War of 1901–1921. He began his research on the life of Charles Lummis in 1956, and during the centennial of the “tramp” toured the cities on Lummis’s route with a multi-media program commemorating the trip.

REVIEWS
“[The letters] are most interesting, often funny, and always informative. . . . If you already like Lummis, this book is for you. If you don’t like him because of his flamboyant writing, try these toned-down reports and you may just end up a convert.”—True West

“James Byrkit’s masterful introduction to the Letters helps to place Lummis in his role as the Southwest’s most ardent turn-of-the-century booster.”—Western Historical Quarterly

“This edition is excellent and should be in any and all collections.”—Los Angeles Corral of the Westerners

“If you wish to become acquainted with the real Mr. Charles Fletcher Lummis, read this book.”—The Californians

“Byrkit’s introduction is as important and revealing as the letters themselves. . . . Lummis’s 3,000 mile trek brought the Southwest to the people through the eyes of this curious and courageous young newspaper man. . . . totally captivating.”—Red Rock News