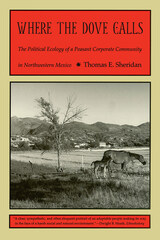 Thomas Sheridan's study of the municipio of Cucurpe, Sonora, offers new insight into the ability of peasants to respond to ecological and political change. In order to survive as small rancher-farmers, the Cucurpeños battle aridity and one another in a society characterized by sharp economic inequality and long-standing conflict over the distribution of land and water. Sheridan has written an ethnography of resource control, one that weds the approaches of political economy and cultural ecology in order to focus upon both the external linkages and internal adaptations that shape three peasant corporate communities. He examines the ecological and economic constraints which scarce and necessary resources place upon households in Cucurpe, and then investigates why many such households have formed corporate communities to insure their access to resources beyond their control. Finally, he identifies the class differences that exist within the corporate communities as well as between members of those organizations and the private ranchers who surround them. Where the Dove Calls (the meaning of "Cucurpe" in the language of the Opata Indians), an important contribution to peasant studies, reveals the household as the basic unit of Cucurpe society. By viewing Cucurpe's corporate communities as organizations of fiercely independent domestic units rather than as expressions of communal solidarity, Sheridan shows that peasants are among the exploiters as well as the exploited. Cucurpe¤os struggle to maintain the autonomy of their households even as they join together to protect corporate grazing lands and irrigation water. Any attempt to weaken or destroy that independence is met with opposition that ranges from passive resistance to violence.
AUTHOR BIOGRAPHY
Thomas E. Sheridan holds a joint appointment as professor of Anthropology at the Southwest Center and the Department of Anthropology at the University of Arizona. He has authored or co-edited eleven other books.