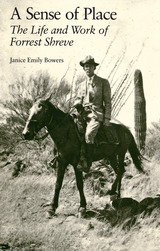 Forrest Shreve (1878-1950) was an internationally known plant ecologist who spent most of his career at the Carnegie Institution's Desert Laboratory in Tucson, Arizona. Shreve's contributions to the study of plant ecology laid the groundwork for modern studies and several of his works came to be regarded as classics by ecologists worldwide. This first full-length study of Shreve's life and work demonstrates that he was more than a desert ecologist. His early work in Maryland and Jamaica gave him a breadth of expertise matched by few of his ecological contemporaries, and his studies of desert plant demography, the physiological ecology of rain-forest plants, and vegetational gradients on southwestern mountain ranges anticipated by decades recent trends in ecology.

Tracing Shreve's development from student to scientist, Bowers evokes the rigors and delights of fieldwork in the first half of this century and shows how Shreve's sense of place informed his scientific thought—making him, in his own words, "not an exile from some better place, but a man at home in an environment to which his life can be adjusted without physical or intellectual loss."
AUTHOR BIOGRAPHY
Janice Emily Bowers is a botanist with the U.S. Geological Survey in Tucson.
TABLE OF CONTENTS
Contents
List of Illustrations
Preface
His Home the Desert
Getting Experience
A Good Fit All Around
The Limbo of Controversy
Energy, Push, and Solid Horse Sense
Tumamocville
The Shifting Panorama
Point and Counterpoint
Mountain Islands
Our Mutual Arbeit
A Place in the Sun
The Finest Trip
A Wider Outlook
A Splendid Field for Work
Understanding Desert Life
A Model and a Classic
A Bitter Shock
Weaving the Threads
Appendix: Common Plant Names and Their Scientific Equivalents
Notes to the Chapters
Bibliography
Publications of Forrest Shreve
Index