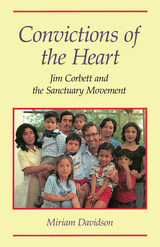 The death of twenty-one Salvadoran refugees in the Arizona desert in 1980 made many Americans aware for the first time that people were struggling—and dying—to find political asylum in the United States. Tucsonan Jim Corbett first encountered the problem while attempting to help a hitchhiking refugee. What came of that act of altruism was a movement that spread across the country, challenged the federal government, and brought the refugee problem to national awareness.

Corbett first worked within the law to help refugees process applications for asylum, but the U.S. Immigration and Naturalization Service soon began a program of arrests; then he began to smuggle refugees from the Mexican border to the homes of citizens willing to provide shelter, making hundreds of trips over the next two years; finally he enlisted the support of the Tucson Ecumenical Council and persuaded John Fife, pastor of the Southside Presbyterian Church, to open that building as a refuge. When legal action against Corbett and the others seemed imminent, Southside became, on March 24, 1982, the first of two hundred churches in the country to declare itself a sanctuary.

Convictions of the Heart takes readers inside the santuary movement to reveal its founders' motives and underlying beliefs, and inside the courtroom to describe the government's efforts to stop it. Although the book addresses many points of view, its primary focus is on the philosophy of Jim Corbett. Rooted in the nonviolence of Gandhi, the Society of Friends, and Martin Luther King, Corbett's beliefs challenged individuals and communities of faith across the country to examine the strength of their commitment to the needs and rights of others.
AUTHOR BIOGRAPHY
Miriam Davidson is a Tucson-based writer whose work focuses on border issues. Her award-winning journalism has appeared in the New York Times, the AARP Bulletin, the Arizona Republic, the Nation, the Progressive, and many other outlets. She attended Yale College and the University of Southern California’s Annenberg School for Communication and Journalism.
TABLE OF CONTENTS
Contents
The Inner Light
A Quiet Testimony
Into the Breach
Speak Truth to Power
Way Will Open
Notes
Acknowledgments
Index