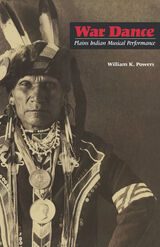 The Indian powwow, with its colorful war dance, is among the most vital aspects of American Indian culture. William Powers has witnessed both the traditions and trends in Plains Indian music and dance over the past thirty years, and here encapsulates his long career in what may be the first book that deals with Plains Indian musical culture as a unit. After providing background material on the study of American Indian music, Powers gives a full description of the popular war dance, discusses the powwow as the context in which the war dance appears, and describes associated dances. While observing that a fascination with "pan-Indianism" temporarily misdirected the study of Plains Indian music and dance by focusing too sharply on what many believed was a nationalization of American Indians, Powers notes that individual tribes continue to be concerned with maintaining their ethnic identities through their styles of music and dance. In the balance of the book, Powers offers essays describing Plains songs available on disc and tape, including notes on the history and culture of tribes and some translations of Lakota songs. A concluding essay offers some observations of why Plains Indian music and dance have received the interest they have and why they will continue to symbolize a burgeoning contemporary American Indian culture--not only on the Plains, but in every corner of the world where American Indians are respected, admired, and imitated.