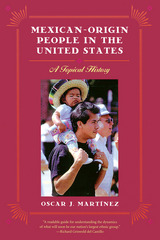 The history of the United States in the twentieth century is inextricably entwined with that of people of Mexican origin. The twenty million Mexicans and Mexican Americans living in the U.S. today are predominantly a product of post-1900 growth, and their numbers give them an increasingly meaningful voice in the political process. Oscar J. Martínez here recounts the struggle of a people who have scraped and grappled to make a place for themselves in the American mainstream.

Focusing on social, economic, and political change during the twentieth century—particularly in the American West—Martínez provides a survey of long-term trends among Mexican Americans and shows that many of the difficult conditions they have experienced have changed decidedly for the better. Organized thematically, the book addresses population dynamics, immigration, interaction with the mainstream, assimilation into the labor force, and growth of the Mexican American middle class. Martínez then examines the various forms by which people of Mexican descent have expressed themselves politically: becoming involved in community organizations, participating as voters, and standing for elective office. Finally he summarizes salient historical points and offers reflections on issues of future significance. Where appropriate, he considers the unique circumstances that distinguish the experiences of Mexican Americans from those of other ethnic groups.

By the year 2000, significant numbers of people of Mexican origin had penetrated the middle class and had achieved unprecedented levels of power and influence in American society; at the same time, many problems remain unsolved, and the masses face new challenges created by the increasingly globalized U.S. economy. This concise overview of Mexican-origin people puts these successes and challenges in perspective and defines their contribution to the shaping of modern America.
AUTHOR BIOGRAPHY
Oscar J. Martínez’s own family migrated from the interior of Mexico to El Paso in the 1950s. He is a Regents Professor of History at the University of Arizona