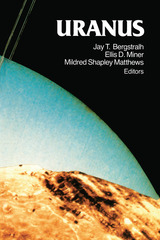 Uranus
edited by Jay T. Bergstralh, Ellis D. Miner and Mildred Shapley Matthews
University of Arizona Press, 1991
Cloth: 978-0-8165-1208-9
Uranus occupies a unique niche in the history of western thought; for while the planets from Mercury to Saturn had been known since pre-antiquity, Uranus was the first to be discovered, in 1781, through scientific investigation. Contemporary investigation of Uranus culminated in the Voyager 2 encounter in 1986. The results of that achievement, as well of concurrent research on the planet, are reviewed by 84 international authorities in this massive volume. Because Uranus' remoteness has prevented its being studied as intensively by earth-based observation as have other members of the solar system, most of what is known about the planet—its magnetic field and magnetosphere and satellites—were learned from the Voyager data, which is viewed here from a variety of perspectives. While the book is intended to serve as a comprehensive review, it also reports a substantial amount of original research results not previously published.