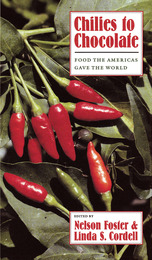 Columbus stumbled upon the New World while seeking the riches of the orient, yet native peoples of the Americas already held riches beyond his knowing. From maize to potatoes to native beans, a variety of crops unfamiliar to Europeans were cultivated by indigenous peoples of the Americas, with other foods like chilies and chocolate on hand to make diets all the more interesting (even when used in combination, as aficionados of molé will attest). Chilies to Chocolate traces the biological and cultural history of some New World crops that have worldwide economic importance. Drawing on disciplines as diverse as anthropology, ethnobotany, and agronomy, it focuses on the domestication and use of these plants by native peoples and their dispersion into the fields and kitchens of the Old World: tomatoes to Italy, chili peppers throughout Asia, cacao wherever a sweet tooth craves chocolate. Indeed, potatoes and maize now rank with wheat and rice as the world's principal crops. "The sweetness of corn on the cob is sweeter for knowing the long, winding way by which it has come into one's hands," observe Foster and Cordell. Featuring contributions by Gary Nabhan, Alan Davidson, and others, Chilies to Chocolate will increase readers' appreciation of the foods we all enjoy, of the circuitous routes by which they have become part of our diets, and of the vital role that Native Americans have played in this process.

CONTENTS
Introduction, by Nelson Foster & Linda S. Cordell
1. Europeans' Wary Encounter with Tomatoes, Potatoes, and Other New World Foods, by Alan Davidson
2. The Renaissance of Amaranth, by Daniel K. Early
3. Vanilla: Nectar of the Gods, by Patricia Rain
4. Maize: Gift from America's First Peoples, by Walton C. Galinat
5. Beans of the Americas, by Lawrence Kaplan & Lucille N. Kaplan
6. The Peripatetic Chili Pepper: Diffusion of the Domesticated Capsicums Since Columbus, by Jean Andrews
7. Forgotten Roots of the Incas, by Noel Vietmeyer
8. A Brief History and Botany of Cacao, by John A. West
9. Quinoa's Roundabout Journey to World Use, by John F. McCamant
Epilogue: Native Crops of the Americas: Passing Novelties or Lasting Contributions to Diversity? by Gary Paul Nabhan
Appendix: Food Plants of American Origin