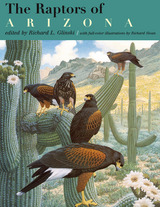 The Raptors of Arizona
by Richard L. Glinski
illustrated by Richard Sloan
University of Arizona Press, 1998
Cloth: 978-0-8165-1322-2
Thousands of birdwatchers come to Arizona each year seeking rare or intriguing species, and for those watching the skies the additional sighting of a bird of prey is a reward in itself. The Grand Canyon state boasts the most dramatic assortment of raptors in North America: hawks, eagles, falcons, kites, and owls, plus vultures and condors. Here can be found nearly all the raptor species of the continental United States and also established populations of species associated with Mexico, such as the Gray Hawk, Common Black-Hawk, Zone-tailed Hawk, and Whiskered Screech-Owl.

Arizona's raptors are found in an unrivaled diversity of habitats, from saguaro cactus forests where tiny Elf Owls nest to the Vermilion Cliffs, where the gigantic California Condor was introduced in 1996. Yet many species live in habitats that are now jeopardized by degradation or development, making an understanding and appreciation of raptors crucial to their survival.

The Raptors of Arizona brings together the knowledge and insights of 29 raptor and wildlife authorities who provide original information and syntheses on Arizona's 42 raptor species, with an emphasis on aspects of their natural history in Arizona. A chapter on each bird includes its description, a range map, and information on its distribution, habitat, life history, and status. Additional chapters cover conservation, habitats, where and when to watch raptors, and the sport of falconry. The book is enhanced by 42 full-color illustrations by Richard Sloan, one of the premier wildlife artists in North America, whose paintings were commissioned by the Arizona Wildlife Foundation specifically for this project. Co-published with the Arizona Game and Fish Department.
AUTHOR BIOGRAPHY
Richard L. Glinski has sought out raptors in Arizona for more than thirty years and has worked for the Arizona Game and Fish Department since 1980. Richard Sloan is a recipient of the prestigious Leigh Yawkey Woodson Art Museum's Master Wildlife Artist Award for 1994, and his works are included in the permanent collection of the Smithsonian Institution.