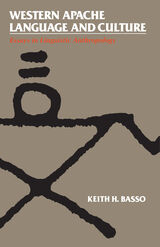 Seven essays, collected here for the first time, define some of the central concerns of linguistic anthropology through the close study of Western Apache, a language of astonishing complexity. All of the essays have been revised for this anthology. Basso, a major authority in the field of linguistic anthropology, has drawn on fieldwork at the village of Cibecue, whose residents speak a dialect of Western Apache that is spoken nowhere else. He shows how intricacies of language—place names, metaphor, uses of silence—help a people define their very existence, so that, in the words of one Apache woman, "If we lose our language, we will lose our breath; then we will die and blow away like leaves." His essays amply demonstrate that, while Apache language and culture are changing in response to modernization, they remain intricate, vital and unique. These essays illustrate not only the complexity of a particular cultural world as it has emerged to one observer over a protracted period of intensive fieldwork, but also the natural movement from the study of grammatical categories to that of language use and on to the study of the conceptual system underlying it. Each essay addresses a significant theoretical problem; taken together they constitute a microcosm of the anthropological understanding of language.