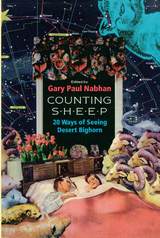 Imagine sending a number of nature writers out into the same unrelenting stretch of Sonoran Desert. Then consider telling them to focus their attention on just one animal—Ovis canadensis, popularly called the desert bighorn or borrego cimarrón—and have them write about it. Have them write from makeshift blinds or from behind a gun barrel. Have them write while walking across the Cabeza Prieta at night, or while flying over it trying to radio-collar the creatures. Have them write from actual sightings of the animals or simply from their tracks and droppings. What would result from such an exercise is Counting Sheep, an unusual anthology that demonstrates the range of possibilities in nature writing. While ostensibly a collection of writings about these desert sheep that live along the U.S.-Mexico border, it also represents an attempt to broaden the scope of the natural history essay. Writers trained in a wide range of disciplines spanning the natural and social sciences here offer a similarly diverse collection of writings, with women's, Hispanic, and Native American views complementing those in a genre long dominated by Anglo men. The four sections of the anthology comprise pre-Anglo-American tradition, examples of early nature writing, varied responses by modern writers to actually counting sheep, and a selection of essays that place bighorns in the context of the larger world. Counting Sheep celebrates the diversity of cultural responses to this single animal species in its Sonoran Desert habitat and invites readers to change the way in which they view their relationship to wild creatures everywhere. It also shows how nature writers can delight us all by the varied ways in which they practice their craft.