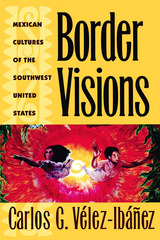 The U.S.-Mexico border region is home to anthropologist Carlos Vélez-Ibáñez. Into these pages he pours nearly half a century of searching and finding answers to the Mexican experience in the southwestern United States. He describes and analyzes the process, as generation upon generation of Mexicans moved north and attempted to create an identity or sense of cultural space and place. In today’s border fences he also sees barriers to how Mexicans understand themselves and how they are fundamentally understood. From prehistory to the present, Vélez-Ibáñez traces the intense bumping among Native Americans, Spaniards, and Mexicans, as Mesoamerican populations and ideas moved northward. He demonstrates how cultural glue is constantly replenished by strengthening family ties that reach across both sides of the border. The author describes ways in which Mexicans have resisted and accommodated the dominant culture by creating communities and by forming labor unions, voluntary associations, and cultural movements. He analyzes the distribution of sadness, or overrepresentation of Mexicans in poverty, crime, illness, and war, and shows how that sadness is balanced by creative expressions of literature and art, especially mural art, in the ongoing search for space and place. Here is a book for the nineties and beyond, a book that relates to NAFTA, to complex questions of immigration, and to the expanding population of Mexicans in the U.S.-Mexico border region and other parts of the country. An important new volume for social science, humanities, and Latin American scholars, Border Visions will also attract general readers for its robust narrative and autobiographical edge. For all readers, the book points to new ways of seeing borders, whether they are visible walls of brick and stone or less visible, infinitely more powerful barriers of the mind.
AUTHOR BIOGRAPHY
Carlos G. Vélez-Ibáñez is the author of Bonds of Mutual Trust: The Cultural Systems of Rotating Credit Associations among Urban Mexicans and Chicanos and Border Visions: Mexican Cultures of the Southwest United States, the latter published by the University of Arizona Press. He currently serves as Presidential Motorola Professor of Neighborhood Revitalization, as well as Chairman of the Department of Transborder Chicana/o and Latina/o Studies at Arizona State University.