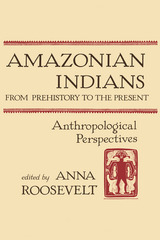 Amazonia has long been a focus of debate about the impact of the tropical rain forest environment on indigenous cultural development. This edited volume draws on the subdisciplines of anthropology to present an integrated perspective of Amazonian studies. The contributors address transformations of native societies as a result of their interaction with Western civilization from initial contact to the present day, demonstrating that the pre- and postcontact characteristics of these societies display differences that until now have been little recognized.