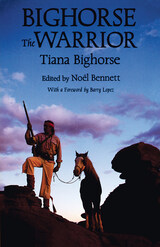 "I want to talk about my tragic story, because if I don't, it will get into my mind and get into my dream and make me crazy."

When the Navajos were taken from their land by the federal government in the 1860s, thousands lost their lives on the infamous Long Walk, while those who eluded capture lived in constant fear. These men and women are now dead, but their story lives on in the collective memory of their tribe.

Gus Bighorse lived through that period of his people's history, and his account of it—recalled by his daughter Tiana and retold in her father's voice—provides authentic glimpses into Navajo life and values of a century ago. Born around 1846, Gus was orphaned at sixteen when his parents were killed by soldiers, and he went into hiding with other Navajos banded together under chiefs like Manuelito. Over the coming years, he was to see members of his tribe take refuge in Canyon de Chelly, endure the Long Walk from Fort Defiance to Bosque Redondo in 1864, and go into hiding at Navajo Mountain. Gus himself was the leader of one of Manuelito's bands who fought against Kit Carson's troops.

After the Navajos were allowed to return to their land, Gus took up the life of a horseman, only to see his beloved animals decimated in a government stock reduction program.

"I know some people died of their tragic story," says Gus. "They think about it and think about how many relatives they lost. Their parents got shot. They get into shock. That is what kills them. That is why we warriors have to talk to each other. We wake ourselves up, get out of the shock. And that is why I tell my kids what happened, so it won't be forgot." Throughout his narrative, he makes clear those human qualities that for the Navajos define what it is to be a warrior: vision, compassion, courage, and endurance.

Befitting the oral tradition of her people, Tiana Bighorse draws on her memory to tell her father's story. In doing so, she ensures that a new generation of Navajos will know how the courage of their ancestors enabled their people to have their reservation today: "They paid for our land with their lives." Following the text is a chronology of Navajo history, with highlights of Gus Bighorse's life placed in the context of historical events.
AUTHOR BIOGRAPHY
Tiana Bighorse is a Navajo weaver who lives in Tuba City, Arizona. Noel Bennett came to the Navajo reservation in 1968 and studied weaving with Tiana for eight years, which initiated a lifelong friendship. Noel Bennett is also the author of Halo of the Sun; both are authors of Working with the Wool.
TABLE OF CONTENTS
Contents
List of Illustrations
Foreword by Barry Lopez
Acknowledgments
Preface by Noël Bennett
Introduction
Why I Tell My Stories
My Parents' Background
Growing Up
Chosen to Be a Leader
A Man Jumps Off the Cliff
Hiding in Canyon de Chelly
The Long Walk to Hwéeldi
Hiding Behind the Mountain
Tségháá'
Living at Hwéeldi
The Chiefs Sign the Treaty
Coming Back to the Homeland
Unrest
Captured by the Mexicans
Making a Living
How I Got the Name Bighorse
The Horse Race
More Raiding
My Last Journey
Historical Context
Index
Illustration Credits