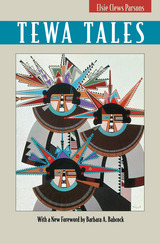 Tewa Tales
by Elsie Clews Parsons
University of Arizona Press, 1994
Paper: 978-0-8165-1452-6
The Tewa are a Pueblo Indian group from New Mexico, some of whom migrated around 1700, in the aftermath of the second Pueblo Revolt, to their present location on First Mesa of the Hopi Reservation in northern Arizona. This collection of more than one hundred tales from both New Mexico and Arizona Tewa, first published in 1926, bears witness to their rich cultural history. In addition to emergence and animal stories, these tales also provide an account of many social customs such as wedding ceremonials and relay racing--that show marked differences between the two tribal groups. A comparison of tales from the two divisions of the tribe reveals something of what has happened to both emigrant and home-staying Tewa over two centuries of separation. Yet, while only half of the Arizona tales are distinctly parallel to the New Mexican, additional similarities may be found in such narrative features as the helpfulness of Spider old woman and her possession of medicine, creating life magically under a blanket, or Coyote beguiling girls into marriage. Elsie Clews Parsons was a pioneering anthropologist in the Southwest whose works included the encyclopedic Pueblo Indian Religion. The Tewa tales she gathered for this volume are thus notable not only as fascinating stories that will delight curious readers, but also as authentic reflections of a people less known to scholars.