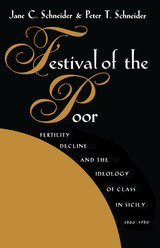 The historical decline of fertility in Europe has occupied a central place in social history and demography over the past quarter-century. Most scholars credit Europeans with modulating sexual behavior, through either abstinence or the practice of coitus interruptus, as a rational choice made in the interest of personal economic comfort; yet peasant and working classes have typically lagged behind in birth control and have given rise to the adage that "sexual embrace is the festival of the poor." Scholarly analyses of "lag" often reinforce this stigmatizing view. Now this subject is given a fresh look through a case study in Sicily, one of the last outposts of Western Europe's demographic transition. By examining population changes in a single community between 1860 and 1980, the authors offer an extended review and critique of existing models of fertility decline in Europe, proposing a new interpretation that emphasizes historical context and class relations. They show how the spread of capitalism in Sicily induced an unprecedented rate of population growth, with boom-and-bust cycles creating the class experiences in which "reputational networks" came to redefine family life; how Sicilians began to control their fertility in response to class-mediated ideas about gender relations and respectable family size; and how the town's gentry, artisan, and peasant classes adopted family planning methods at different times in response to different pressures. Jane and Peter Schneider's anthropologically oriented political-economy perspective challenges the position of Western Europe as a model for fertility decline on which every other case should converge, looking instead at the diversity of cultural ideals and practices--such as those found in Sicily--that influence the spread and form of birth control. Combining anthropological, oral historical, and archival methods in new and insightful ways, the authors' synthesis of a particular case study with a broad historical and theoretical discussion will play a major role in the ongoing debates over the history of European fertility decline and point the way toward integrating the analysis of demographic upheaval with the study of class formation and ideology.
AUTHOR BIOGRAPHY
Jane C. Schneider is a professor in the Ph.D. program in anthropology at the Graduate School and University Center of the City University of New York. Peter T. Schneider is a professor of sociology in the Department of Sociology and Anthropology, Fordham University, Fordham College at Lincoln Center.