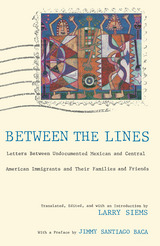 Between the Lines: Letters Between Undocumented Mexican and Latin American Immigrants and Their Families and Friends
edited by Larry Siems
University of Arizona Press, 1992
Paper: 978-0-8165-1552-3
In the continuing U.S. debate over illegal immigration, a human face has rarely been shown. The topic has been presented as a monolithic abstraction, a creation of statistics, political rhetoric, and fear. This collection of letters between undocumented immigrants in California and their families back home reveals the other side of the story. Published for the first time in paperback, Between the Lines reveals the often poignant human drama currently being played out along the U.S.-Mexico border. The letters, presented in Spanish and English, express powerful feelings of hope, uncertainty, and fear among the undocumented travelers as they arrive in the United States and seek work, social support and legal status. The letters from their families in Mexico, Guatemala, and El Salvador return feelings of hope, love, and support. Translator/editor Siems provides a powerful and lyrical introductory essay that sets the stage for the letters that follow.