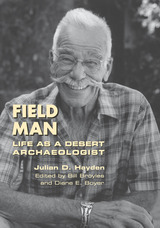 Field Man is the captivating memoir of renowned southwestern archaeologist Julian Dodge Hayden, a man who held no professional degree or faculty position but who camped and argued with a who's who of the discipline, including Emil Haury, Malcolm Rogers, Paul Ezell, and Norman Tindale. This is the personal story of a blue-collar scholar who bucked the conventional thinking on the antiquity of man in the New World, who brought a formidable pragmatism and "hand sense" to the identification of stone tools, and who is remembered as the leading authority on the prehistory of the Sierra Pinacate in northwestern Mexico.
But Field Man is also an evocative recollection of a bygone time and place, a time when archaeological trips to the Southwest were "expeditions," when a man might run a Civilian Conservation Corps crew by day and study the artifacts of ancient peoples by night, when one could honeymoon by a still-full Gila River, and when a Model T pickup needed extra transmissions to tackle the back roads of Arizona.
To say that Julian Hayden led an eventful life would be an understatement. He accompanied his father, a Harvard-trained archaeologist, on influential excavations, became a crew chief in his own right, taught himself silversmithing, married a "city girl," helped build the Yuma Air Field, worked as a civilian safety officer, and was a friend and mentor to countless students. He also crossed paths with leading figures in other fields. Barry Goldwater and even Frank Lloyd Wright turn up in this wide-ranging narrative of a "desert rat" who was at once a throwback and--as he only half-jokingly suggests--ahead of his time.
Field Man is the product of years of interviews with Hayden conducted by his colleagues and friends Bill Broyles and Diane Boyer. It is introduced by noted southwestern anthropologist J. Jefferson Reid, and contains an epilogue by Steve Hayden, one of Julian's sons.
AUTHOR BIOGRAPHY
A field archaeologist by avocation, Julian Hayden (1911-1998) began exploring and mapping the Sierra Pinacate in 1958. His pioneering work, innovative theories, lively curiosity, and distinctive personality made him legendary among southwestern scholars and desert rats. He was the author of three books and numerous scholarly articles, chapters, and reviews. He died in Tucson at the age of 87. Bill Broyles is the author of Organ Pipe Cactus National Monument: Where Edges Meet and Our Sonoran Desert, and co-editor of Dry Borders: Great Natural Reserves of the Sonoran Desert. A research associate with the University of Arizona's Southwest Center, he is also working to create a Sonoran Desert peace park on the Arizona-Sonora border. Diane Boyer has worked as a photo archivist for public agencies for twenty years. She is co-author of Damming Grand Canyon: The 1923 USGS Colorado River Expedition and co-editor of Repeat Photography: Methods and Applications in the Natural Sciences.
TABLE OF CONTENTS