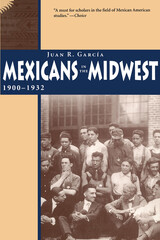 Early in this century, a few Mexican migrants began streaming northward into the Midwest, but by 1914--in response to the war in Europe and a booming U.S. economy--the stream had become a flood. Barely a generation later, this so-called Immigrant Generation of Mexicans was displaced and returned to the U.S. Southwest or to Mexico. Drawing on both published works and archival materials, this new study considers the many factors that affected the process of immigration as well as the development of communities in the region. These include the internal forces of religion, ethnic identity, and a sense of nationalism, as well as external influences such as economic factors, discrimination, and the vagaries of U.S.-Mexico relations. Here is a book that persuasively challenges many prevailing assumptions about Mexican people and the communities they established in the Midwest. The author notes the commonalities and differences between Mexicans in that region and their compadres who settled elsewhere. He further demonstrates that although Mexicans in the Midwest maintained a strong sense of cultural identity, they were quick to adopt the consumer culture and other elements of U.S. life that met their needs. Focusing on a people, place, and time rarely covered before now, this wide-ranging work will be welcomed by scholars and students of history, sociology, and Chicano studies. General readers interested in ethnic issues and the multicultural fabric of American society will find here a window to the past as well as new perspectives for understanding the present and the future.
AUTHOR BIOGRAPHY
Juan R. Garcia received his Ph.D. from the University of Notre Dame in 1977. His major fields are U.S. History and Mexican American Studies. He also holds two M.A. degrees, one from De Paul University in Latin American history, and the other from the University of Norte Dame in U.S. history.
TABLE OF CONTENTS