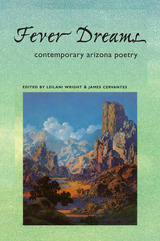 Dream worlds, real worlds: this book ushers in an extraordinary collection of new work by nearly forty poets currently living and writing in Arizona. From campuses and coffee houses, prisons and pueblos, classrooms and kitchen tables comes the work of both well-known and emerging writers drawn to the state's blazing days and starry nights in search of place, time, idea, and self.Brief introductions for each poet reveal that socially, geographically, and emotionally, they come from anywhere and everywhere. Here and together, however, their energy and synergy are shaping a literary landscape unlike any other. They write of jazz, serotonin levels and talk shows, homelessness, convenience stores and gunplay, Tiananmen Square and Bosnia. Their poems, like these lines by Alberto Ríos, are as clear as the desert air: "The birds, they make this happen. / In the sky with nothing else to do, a Saturday, / The slow knee-bend of an afternoon, out there. / I have seen them myself / The birds caw down a rain, tease it / To a hard ground of grass and flat and edge."For the anthology, well-known contributors—Ríos, Richard Shelton, Steve Orlen, Alison Deming, and others—were asked to surprise the editors with their ideas for the best less-known artists to include in the volume. Like a kaleidoscope, then, each page brings a shift in tone and color from the one before, from mainstream, "language," and experimental poetry, to that shaped by rural or traditional cultures.In English, Spanish, and Native languages, voices here reach out to those readers whose home—or whose heart—is in Arizona, and to many others who will never travel here. "Each distinct and other," says Forché of the words in Fever Dreams, make of poetry "what it could not be without this place, translating into poetry its timelessness and awe."Contributors:
William Aberg
Ai
Jed Allen
Barbara Anderson
Jon Anderson
Michael Bowden
Becky Byrkit
Cordelia Candelaria
James Cervantes
David Chorlton
Jeanne E. Clark
Jane Candia Coleman
Michael Cuddihy
Barbara Cully
Alison Hawthorne Deming
Norman Dubie
Beckian Fritz Goldberg
Catherine Hammond
Rex Lee Jim
Ramson Lomatewama
Rita Magdaleno
Jane Miller
Paul Morris
Sheila Murphy
Rick Noguchi
Steve Orlen
Henry Quintero
Alberto R¡os
William Pitt Root
Jeannine Savard
Richard Shelton
Jim Simmerman
Virginia Chase Sutton
Laura Tohe
Tracy Trefethen
Peter Wild
Leilani Wright
Brian Young
Ofelia Zepeda